Today I have a very quick and easy recipe, light and tasty, a great solution for dinner when you don't want to cook for hours.

Take a perch fish fillet (one per person), flour it on each side, put it in a pan where you melted a little butter with a garlic clove, let it golden then add the juice of two lemons and salt.

Let it cook for a while (perch is really quick to cook), keep off garlic and at the end add a little parsley if you like.

Here you are the dinner!

If you don't like lemon you can do the same with white wine.

Of couse you can serve it with any kind of side dish, boiled potadoes and carrots are the best according to me.

Another mushrooms recipe today: we're in the season and I love them so much I buy them almost every week.
Stuffed mushrooms are ok as appetizer or side dish, count about 2-3 each person, now we count about 8 persons.
Ingredients:
24 mushrooms (champignons, not too big)
5 oz sausage
parsley finely chopped
salt and pepper
3 tablespoon milk cream
1/2 glass white dry wine
extravirgin olive oil
1 tablespoon grated parmesan cheese
Clean mushrooms and keep off the stems.
Leave the caps apart, chop in very tiny pieces stems, stirfry them in a pan with oil, salt, pepper, parmesan and the white wine, then add ginned (? I'm not sure about the word) sausage, add parsley and milk cream at the end.
Put everything in the mixer and give a quick turn, then fill the caps with the cream and put in the oven, bake at medium heat for about 15-20 minutes.
They're really great, one leads another!
Pubblicato da claudia a 10:08 Nessun commento: 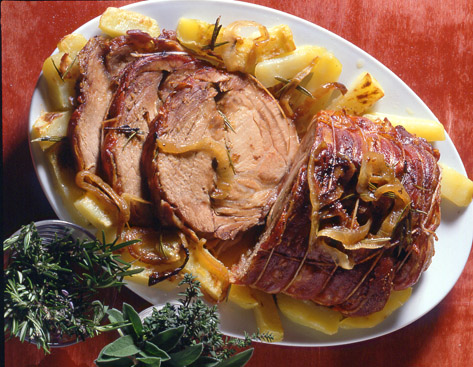 To celebrate Fall today I post the recipe of a great "sunday special": pot roast with porcini mushrooms.

You can use any other kind of mushrooms of course but porcini are definetely the most yummy according to me!

I often prepare this pot roast when I've friends for dinner: it's always loved.

Sprinkle meat with salt and pepper, in a saucepan put the butter, the oil and the garlic cloves turn the heat (medium) and when the fat starts foaming add the meat.

Brown the meat on each side add wine and let it evaporate.

Drain the soaked porcini and chop them, filter the brown water and add it to the roast with broth and mushrooms.

Turn the meat a couple of times during the cooking, let it cook covered until the meat is tender, near the end add parsley .

To slice the meat you must let it become cold or at least warm: then put it again in the pan with sauce and warm it, then serve.

Have a nice fall!

I've converted all the quantity in U.S. measures: enjoy my recipes in an easier way!
It's not simply, I just had had a little bit of time and will...
But now everything it's ok.
If I missed something let me now!
Pubblicato da claudia a 02:58 Nessun commento:

Tiramisu' is a very famous Italian dessert but it's quite new even on our tables.

It hasn't got a long history but, because of it's own great taste, everyone loves it.

Tiramisu’ can be prepared in advance and kept in the freezer.

Remember to remove it from the freezer enough time in advance to serve it cold but soft, not frozen.

1 cup and half of espresso coffee

Prepare espresso and let it be cold (you can sugar it when it's hot and mix but I don't love very much too sweet desserts so I don't usually do it).

With a rubber spatula mash mascarpone cheese untill it's creamy, mix yolks and sugar untill sugar is melted and pour the mixture in the bowl with mascarpone.

Whip the whites and add them to mascarpone: fold the whipped whites in the cream mixing up and down (not round) gently.

Now take a glass container of about 12 X 8 inches, soak ladyfinger one at time and places them in a layer on the bottom of container.

Pour and spread half of the mascarpone cream over the cookies, repeat the step with a second layer of biscuits and top with the rest of the cream.

Sprinkle with cocoa powder or cover with chocolate chips (my favourite!).

Refrigerate for about 3-4 hours.

You can also choose individual servings in glass cups, here just put one layer of ladyfingers and then a generous quantity of cream, in this case 2 hours in the freezer are enough.

Meat broth is often used to cook risotto, to give flavour to roasts and dishes: I don't know if it is usually served as a soup abroad but it's how we mainly eat it in Italy.
If you use it for cooking no one will blame if you use canned broth (better the pownder one than the cubes, less chemical things in the first) but if you want to serve it with pasta (tortellini, angel hair or other tiny shapes) you have to prepare a good homemade meat broth.
It's easier than you can think: the longest part is the cooking but you don't need to take a lot of care of it while it's boiling...
You need ( I found the conversion in gallons and pounds, sooner or later I'll change even the meaures of the ingredients of past recipes):

To be honest I don't use these ingredients because they give broth a too spicy flavour that not always fits what I put in it.

Place the meat in the pot, add tomato, onion, carrots and celery then fill with water.
Add salt and bring the water to a boil.
Cook untill the meat is tender, for 2 lb. of meat you probably have to wait 2-2 1/2 hours, let it gently boil, not too strong or the water will evaporate too soon and too much.
When the meat is ready remove it from the pot (don't throw it, it can be eaten or used in other recipes: the meat from the broth boiling it's called "lesso").
Filter the broth through a fine strainer to clarify it and remove all the small particles. Let the broth cool at room temperature.
When the broth will be cold, the fat will solidify on the surface.
Remove most of the fat with a spoon, how much dipends on you: some people here love fat bubbles in the hot broth, my husband does, I don't (can you imagine the battle when I prepare it?^^ "Leave fat!", "No, it's too much!" and so on...).
Now the broth is ready: just cook in it what you prefer, if you don't use within two days you can preserve it in a bottle in your freezer on into ice forms if you need small portions.