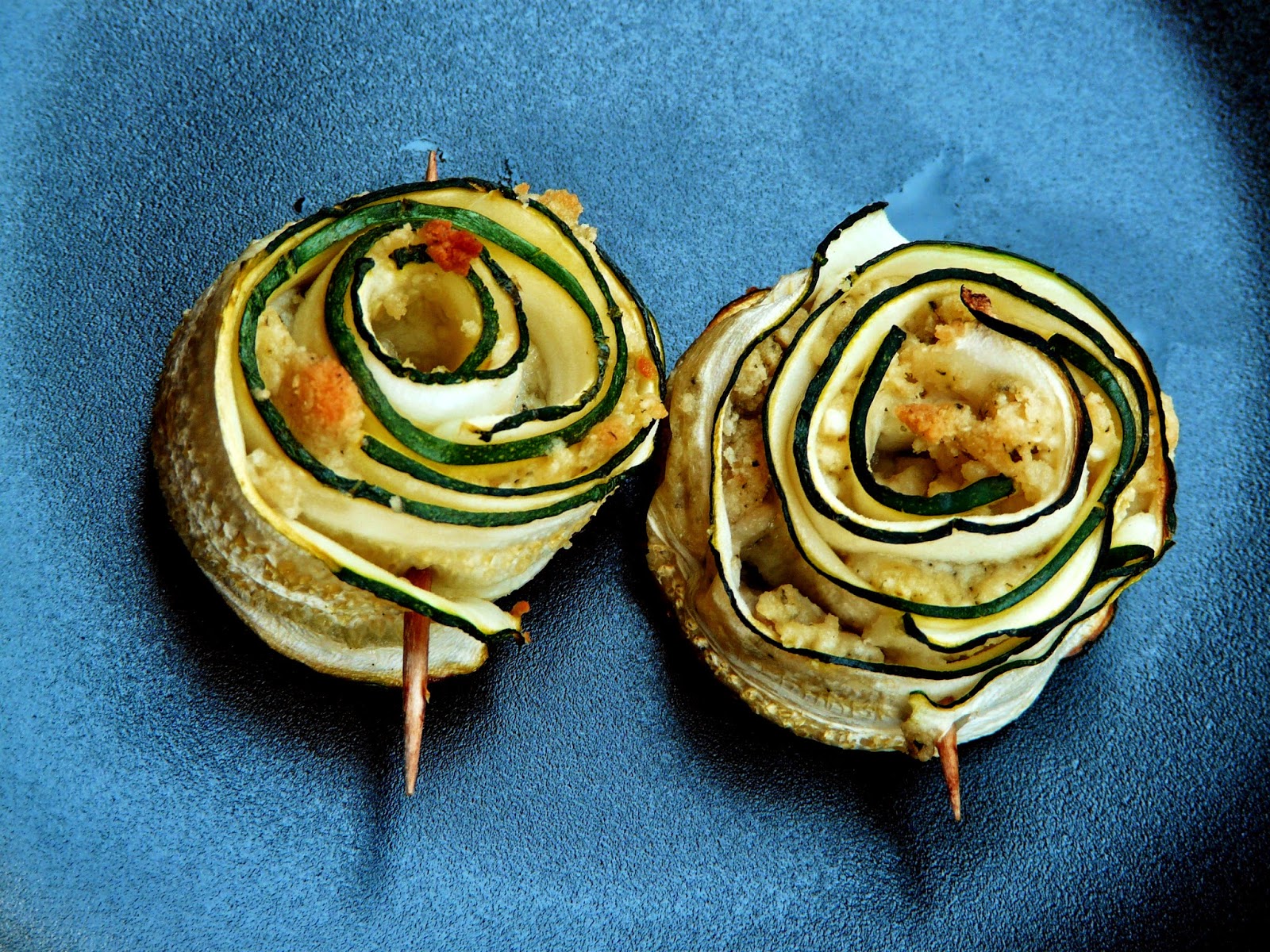 Time for a new post!
It's sunday afternoon, my son is playing alone (miracle) with his Legos and I had the time to post this on my Italian blog La mora Romagnola, now I hope to have spare time enough to translate and post the recipe here too.
These rolls are easy and tasty, vegetarian (or vegan if you avoid feta cheese) and gluten free if you use GF breadcrumbs.
I loved them and I must admit I've eaten almost half before dinner. B)

Using a vegetable slicer slice zucchini the long side, you have to end with long and thin "ribbons" made of zucchini.
Put them on a soup bowl, cover with a dinner plate, put in a microwave and microwave 2-3 minutes at medium power.
In a mixer put breadcrumbs, feta, lemon zest, mint leaves, salt and pepper and oil enough to have a crumbled mixture.
Once zucchini ribbons are cold put them 3 in a row on the short side to make a longer ribbon, spread the mixture then roll carefully.
Fasten the roll with a toothpick.
Do the same with all the zucchini ribbons, put them on a baking pan, if you have spare mixture add it on top of the rolls then bake untill golden at 350°F (about 15 minutes).
You can serve them warm or cold, I'm sure you'll like them!
Pubblicato da claudia a 08:41 Nessun commento: 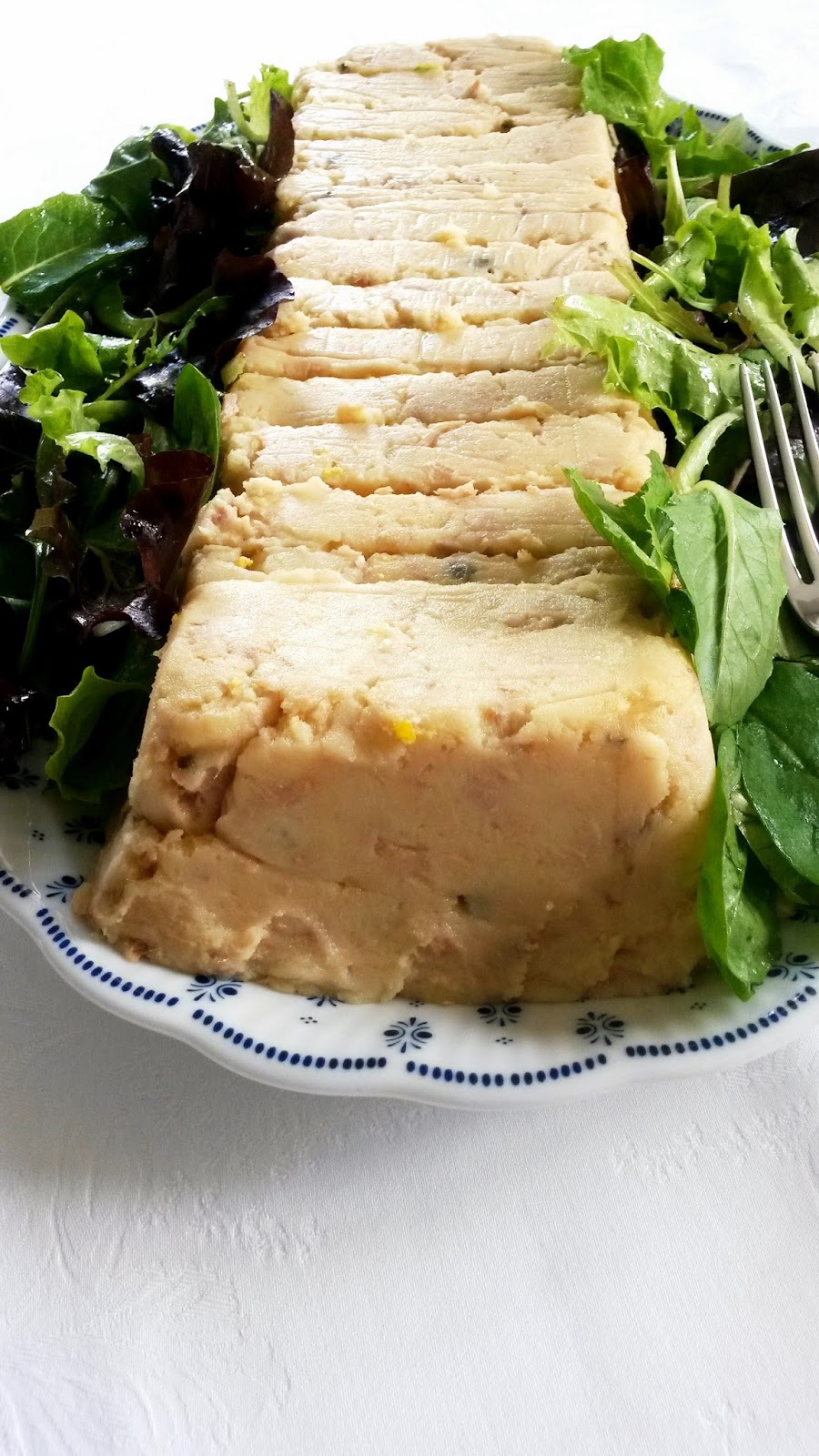 This is an old recipe often made on Christmas holidays, it comes from Genoa and it's a classic lowly dish but it's so easy and tasty!
Don't mind if you don't have a fish mould, I don't too but I used a simple plum-cake pan.
You can serve it with green salad and have a perfect lunch/dinner.
You can use less mayonnaise or a light version or even no mayo at all, just some milk.

2 cans of tuna in oil (drained)

Boil potatoes untill tender, peel them and mash with a potato masher.
In a mixer blend anchovies, tuna, capers, lemon zest, parsley and eggs, when potatoes are cold add the mixture and the mayo, then salt and pepper to taste.
If it's not creamy enough just add more mayo or some milk, pour in a mold or a pan covered with a baking sheet and then cover with cling.
Let it rest in fridge for at least 6 hours (but not more than 24 as it's easy to spoil because of mayo). 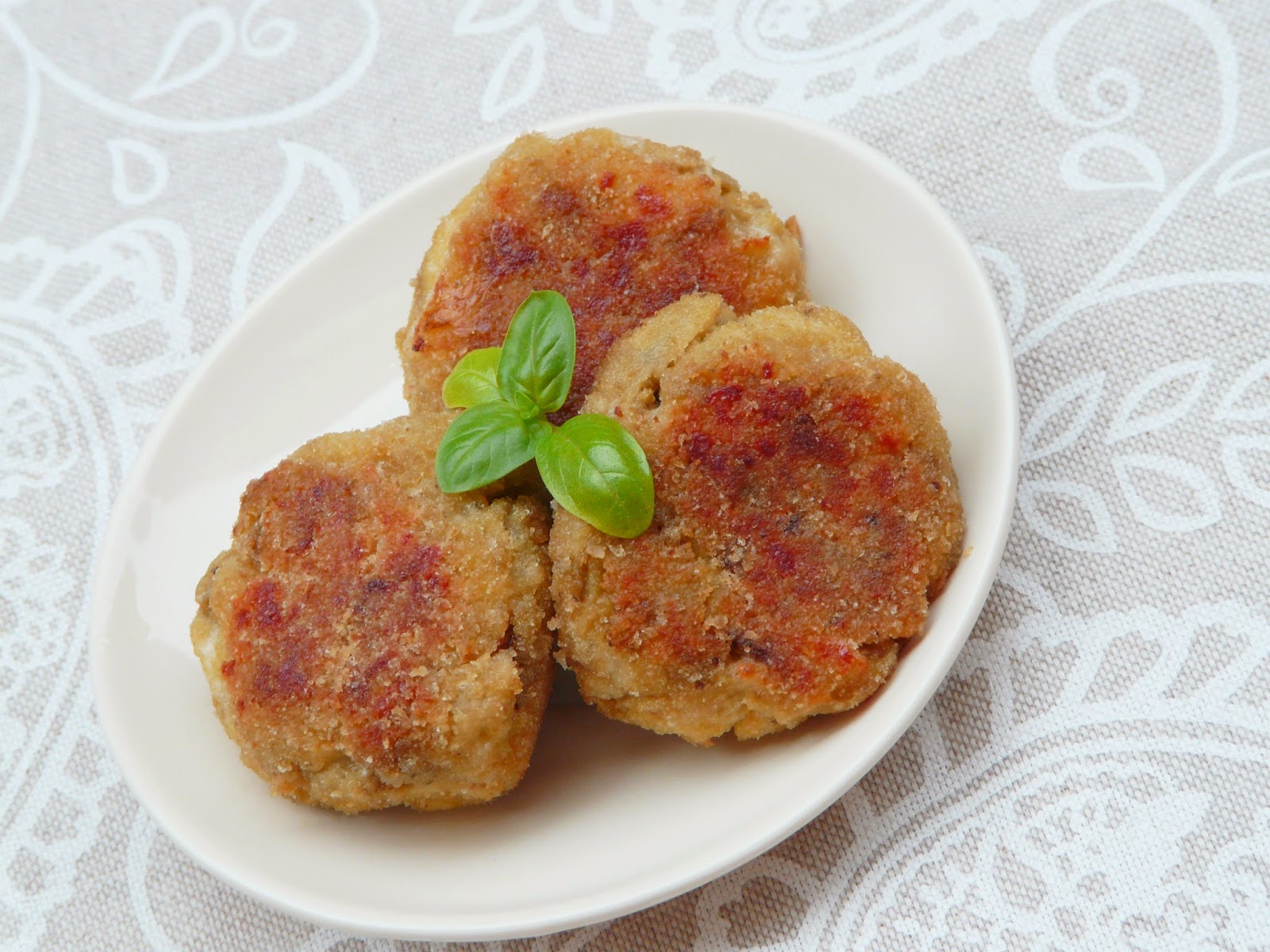 We are in season for eggplants, we love them and we often eat them.
These patties are easy, healthy and loved by children too: they can be served with tomato sauce but I prefer to eat them plain.

1 cup breadcrumbs plus some to roll the patties in

Dice the eggplant and stirfry in a pan with olive oil and the garlic clove untill tender.
Add salt and pepper to taste, when it's cold put it in a blender with diced mozzarella, parmesan, basil leaves, breadcrumbs and egg.
Blend untill well combined, if the mix is too soft you can add some breadcrumbs.
Make small patties the size of a ping pong ball, roll them in the breadcrumbs and cook untill golden in olive oil.
I love them hot so the mozzarella form strings :D 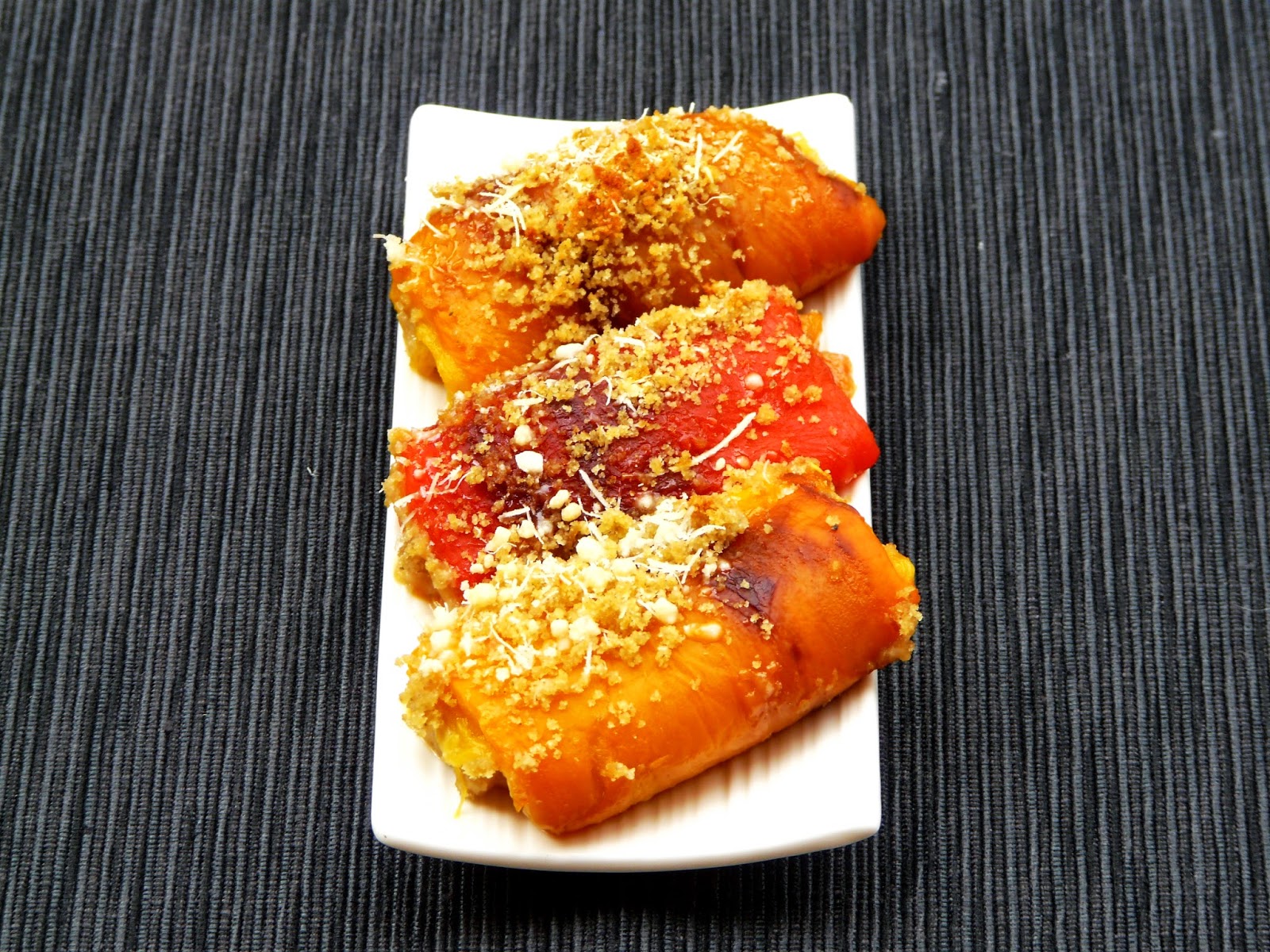 It's been a long time since the last time I've written on this blog.
I had a lot to do in real life and I'm always more into my Italian cooking blog mainly because it took me a while to write in english and I'm always afraid to cut a poor figure.
Now and then, anyway, I feel the need to come back and share something: today it's time for bell peppers rolls.
It's the right time of the year for bell peppers and it's a recipe you can serve as appetizer or side dish, it's quite easy but you have to turn on the oven :D

2 bell peppers ( I did one red and one yellow)

Put in the oven, pre heated at 390°F, the bell peppers.
Let them roast untill they're soft then put them into a sealing bag while they're still hot.
When peppers are warm peel them and cut them in large stripes.
In a mixer put breadcrumbs, capers, garlic, anchovies, salt and pepper and olive oil. Blend untill everything is pulverized.
Put some mixture on the peppers stripes and roll them.
Put all the rolls on a baking pan, sprinkle with the rest of the breadcrumbs mixture and put in the oven just the time to brown the bell peppers.
Let them cool down and serve.